Stephen Sondheim’s sleek and sexy musical Into the Woods will run at the Theatre on the Bay with a fabulous local cast. The show will run from 30 January 2019. 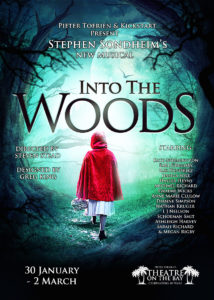 Into the Woods follows the trials and adventures of a collection of well-known fairy-tale characters from Cinderella, Rapunzel, Jack and the Beanstalk, Red Riding Hood and others, as they all go into the deep, dark woods on separate quests, and their paths cross and intersect with sometimes amusing, sometimes alarming results.

But don’t be deceived: this is not a play for children! This is a wicked and wonderful cautionary fairy tale for adults that will delight and haunt in equal measure. Ultimately, it is all about what it means to be human; to long for something other, to wish for something more than what one has, to deal with inevitable loss and terrible beauty.

With its roots deeply planted in old folk tales, Into the Woods offers a rich harvest of ideas. It also has a dazzling score, boasting one of the cleverest, most complex set of lyrics ever written for musical theatre. The exhilarating theatrical experience is what one would expect from Stephen Sondheim, the creator of musical masterpieces such as Sweeney Todd and West Side Story. It debuted in 1986 in San Diego, and has since won numerous Tony Awards and was made into a movie which included Meryl Streep, Anna Kendrick and Johnny Depp.

What: Into the Woods

Read: Into the Woods review