Karin Kortje is on the Cape Town Philharmonic Orchestra’s line-up of fabulous local talent in its 2019 Community Gala concert at Artscape Opera. She spoke to PETA STEWART about her career to date: 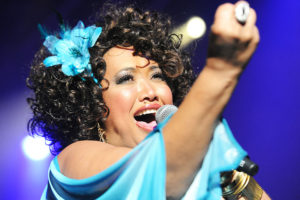 Karin Kortje was 25 when she won, and this was 20 years after her passion for music with which she was born made her start performing at the age of five.

She made history not only because of her voice and personality but also because she was the first black singer to win. “I was relieved because my financial position changed – from earning R385 a month I earned thousands –  and I could give my son a better life, but I was really said to leave my friends and family who are still at the apple factory in the Overberg, where I worked. I rarely get back there now because of the pressures of my career,” she says. 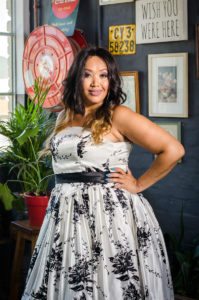 Karin moved to Johannesburg and immediately after winning Idols and went on to record her first album, Forever and a Day which went gold. Singles and mini-albums kept her on the charts, and she was a media darling.

Six months later, tragedy struck as she was betrayed by her boyfriend who was found guilty of murdering a Durbanville B&B owner while she was out singing at a gig, followed by betrayal by the next man she loved.  But, as a person who loves inspiring others, Karin found the strength to cope, without anger.

“Anger is a negative energy that stops you from growing and excelling. I had to forgive and to be honest I do it on a daily basis because it’s so important to not lose focus. By being,  angry you allow yourself to be distracted from your goals.”

So she got on the comeback trail. She sang in Australia, won a Kanna nomination, produced more albums and remained the darling of the media, print, radio and TV. In 2011, she starred  in the musical This Is My Life; her story unfolded at the KKNK, she was Idol of Note in an SABC 3 documentary,  and  was supported by celebrity friends to celebrate her 10th anniversary of winning Idols in 2015.

Was she scared when she made her comeback? “Like anyone else, I was nervous and a little scared but I also knew that the stage is the one place from which I will never be able to separate myself. So I faced the fears and conquered them,” she replies.

Reconnecting with her roots, four years ago Karin launched what is now an NPO, the Karin Kortje Foundation, working with young adults in the rural communities of the Overberg.

“The outreach programme  was created for the unknown aspiring musicians and singers out there who are seeking to make a success of their lives through their talent. We are expanding the Overberg’s Got Talent competition to reach a wider audience.  We are hoping that 2019 will be our year of success as we celebrate our fifth year and the third year of the Divas & Maestros concert, which will hopefully take place in the City Hall in June.

These concerts all feature Camillo Lombard.

“Camillo, along with Basil Appollis, has been my strongest support, and I am honoured to  work with such a legend,” says Karin.

Alan Committee is the master of ceremonies at the CPO Community Gala Concert.