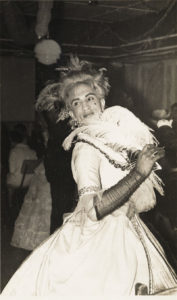 The exhibition, Kewpie Daughter of District Six, will run at the District Six Museum Homecoming Centre in central Cape Town from 21 September until 18 January 2019.

Kewpie, born in 1941, will be seen afresh in this exhibition that features a selection of photos from an archive of 700 prints and accompanying negatives. Of these, approximately 100 photos will go on show, dating from the 1950s to early 1980s.

Viewers will become familiar with Kewpie, the well-known hairstylist and drag artist who would often perform on stage to packed audiences at District Six’s Ambassador Club. Kewpie also ran Salon Kewpie in Kensington. She passed away in 2012.

The District Six Museum and the Gay & Lesbian Memory in Action (GALA) are joint hosts of the exhibition, with funding from the Norwegian Embassy in South Africa. The exhibition’s co-curators are Jenny Marsden (GALA) and Tina Smith (District Six Museum). While the Museum focuses on preserving narratives and artifacts from the District Six area demolished during apartheid, GALA is the keeper of a uniquely African archival collection. The latter documents the history, culture and experiences of LGBTIQ+ people.

Through exploring Kewpie’s life story and queer culture in District Six, this exhibition promotes a positive and inspiring message of diversity and integration in District Six and is a celebration of LGBTIQ+ history.

The photographs and accompanying material explore Kewpie’s life and drag culture in District Six, introducing a new audience to a fascinating period of social history and deepening historical understandings of the diverse District Six community. The exhibition depicts the full and complex lives of Kewpie and friends, showing both the carefully crafted public personas of the drag queens and also their private ‘off-duty’ lives. The rich photographic imagery helps the audience understand how people in the District lived – the clothes they wore, the houses they lived in, parties they attended, holidays they went on, Christmas celebrations and relationships between neighbours and friends in the community. 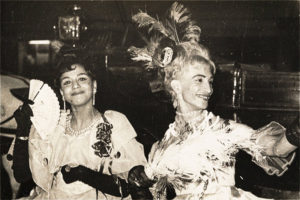 The photographs offer a sense of the physicality of District Six, as they show the urban infrastructure of streets, factories and shops. The vivid visual depiction of lived experience and place contrasts dramatically with information presented about the eventual destruction of District Six and displacement of the community as a result of forced removals.

District Six Museum director Bonita Bennett says the exhibition tells a “wonderful story of resilience, zest for life, style and community lived out against the backdrop of forced removals which was happening all around”. “Kewpie’s story and that of the community around her which included those whose gender choices were not mainstream, tells a story of acceptance and embracing of differences which is not without pain and struggle,” says Bennett.

The Museum’s exhibition curator Tina Smith says GALA has a “valuable resource which records a thriving and celebrated queer culture within a community that has since been displaced”.

What: Kewpie Daughter of District Six

Where and when: The exhibition opens to the public on 21 September 2018 and will run until 18 January 2019 at the District Six Museum Homecoming Centre on Buitenkant Street in central Cape Town