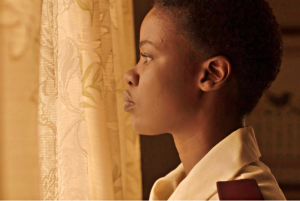 Lakutshon’ ilanga (When The Sun Sets) focuses on a woman who desperately tries to save her brother from a horrific fate. A young, Black nurse in 1985 apartheid South Africa must face her worst fears when she learns that her activist, younger brother may be in danger when he doesn’t return after school. This true story was inspired by the director’s mother and touches on violence against freedom fighters in South Africa during apartheid.

Director/writer Phumi Morare’s short films have played at international film festivals including Telluride Film Festival, Clermont-Ferrand Film Festival, and the American Black Film Festival. Her upcoming project Why The Cattle Wait was selected for the 2021 Berlinale Talents Durban program and the 2021 Tribeca Chanel Through Her Lens Women’s Filmmaker Program. Phumi is interested in redeeming the Black and feminine identity and using the Black female gaze to tell intimate stories of ordinary heroes and women.

Producer Christine Cho brings a background in writing and producing, and aims to create and put forward stories that inspire social and structural change. Christine is currently working on writing and producing short-form content at Story Mode, a young and diverse production company committed to bringing BIPOC, AAPI, and LGBTQ+ characters to the forefront. The director and the producer are interested in telling authentic stories, which is why this film was shot in South Africa with local actors, including Zikhona Bali, who won a South African Film and Television Award.