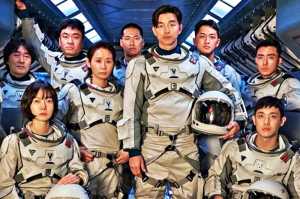 I hadn’t heard anything about The Silent Sea, but I watched the trailer and had a good sense that I was going to like it. I just didn’t realise how much. It is another Korean offering but is a more traditional sci-fi thriller than the famously popular Squid Game which was not my cuppa.

The eight episodes of The Silent Sea plot a mission from a water scarce, dystopian earth to the moon to retrieve some mysterious samples, five years after the research centre suffered a terrible catastrophe that wiped out the whole resident team.

Set up as political

It takes a while to get into; I have grown so used to a Western sensibility in terms of style, pace, and action, and I am not familiar with Korean actors. The dry and desperate Korea on earth is beautifully and heart achingly rendered, with long lines of thirsty people waiting in the dust for their water ration, and the rich having privileges and more access. The problem (no water) and its solution is instantly set up as political, with science being the tool of the connected.

Inserted into this is the personal story of Doctor Song Ji-an played by Bae Doona, who is chosen to be the scientist on the mission, even though her sister was killed on the moon during the disaster.

Once on the moon, all hell breaks loose. Members of the crew are not who they seem, the captain also has a noose over his head (his sick daughter back home), there is what seems to be an airborne virus (!) that causes terrible water deaths, and an ‘intruder’ that has it in for them.  The plot is tense and twisty, and the set is both gritty and slick. And, of course, there is a beautiful message about mankind and the massive messes we have made in the name of science and progress. But, mostly, this is a wonderful story, told so well.

I loved the performances, the music, the styling and the message. I am sorry I watched it all in two days.

What: The Silent Sea