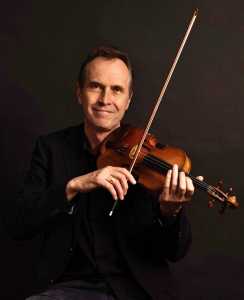 Violinist David Juritz (pictured left) opens the new CPO season with the 5th Mozart Violin Concerto. He speaks to PETA STEWART about the work, and what he has been up to:

There was always only one option for former Capetonian David Juritz to leave London, and that was to leave for Cape Town.  The fact that there were other factors at play all the time did mean that he never made the decision to return for good, even though he only planned on spending three years post matric on scholarship to the Royal College of Music. Two post-graduate diplomas, a job offer to join the English Chamber Orchestra (later leader of the London Mozart Players), a musical life that included touring to great venues like Carnegie Hall, collaborating with great musicians like Gidon Kremer, Barenboim, Murray Perahia, his childhood hero Isaac Stern and others kept him grounded in London. Plus an English wife!

Nevertheless, Juritz returns home often, sometimes to perform, and sometimes to see his mother, the widow of the renowned physicist, the late UCT professor John Juritz, and to finally, after some 30 years, make his debut with the CPO (previous chances didn’t come to fruition and he is now able to cross this off his bucket list!).  He is in town to perform the 5th Mozart Violin Concerto in the opening concert of the Cape Town Philharmonic Orchestra’s Summer Symphony Festival at the City Hall on 20 January 2022. Also on the programme is the Saint-Saȅns Organ Symphony. The programme, all under the direction of principal guest conductor Bernhard Gueller, will begin with Nimrod from Elgar’s Enigma Variations, to honour all those, especially three CPO composers Peter Klatzow, Allan Stephenson and Thomas Rajna,  who lost their lives in the last year.

He is excited about the concerto, which he will perform on his J.B. Guadagnini violin, made in Piacenza in 1748.

“I can’t wait. I still find it amazing that Mozart was a teenager when he wrote his five violin concertos. The final one, ‘The Turkish’, fizzes with energy from its very first bar. From the serene entry for the solo violin to the virtuoso interlude in the finale, from which the concerto takes its name, it’s filled to the brim with the charm and exuberance of a young man looking forward to a brilliant future. Mozart marks the first movement ‘Allegro aperto’ or ‘open’. We’ve all been through two very complicated years so it feels perfect to be playing a concerto that is such a joyful celebration of life in my first concert of 2022.”

Juritz really didn’t have an option, he says, when choosing a career.

“My father studied physics and music (he played both a bassoon and a piano concerto by Mozart in his graduation recital – then chose physics but he used his love of performing in his academic life and I think music was his first love. He and my mother encouraged both my brother Rob and I to perform and Rob chose the dark side! He is today a jazz musician in London and together with Rob, his children and my children, Jocelyn and Jordy, we have a family band.” This band covers all the basses – from bass to piano, violin, sax, bassoon and guitar.

He didn’t always know that he would be a musician.

“I think musicians are often the last people to realize what they will do. I thought of becoming be an architect but then won a full scholarship to the Royal College of Music.” This straight after he matriculated, having taken lessons with Noel Travers at the SA College of Music from the age of five and playing a few times as an ad hoc member of the then Cape Town Symphony Orchestra.

Today he says he couldn’t imagine another life, a life in which music is also “my hobby”  although it does compete with sailing, something he picked up on Zeekoeivlei and transferred to the Thames where he sails laser dinghies a couple of times a month.

Music does consume his life and apart from the family band he is part of the London Tango Quintet (he and Jane, his wife, are passionate tango dancers), he teaches privately, often coaching those who are preparing for auditions, but playing is his main activity.

Playing Bach in the streets!

In 2007 he took a sabbatical from his life in London and spent five months busking around the world visiting 50 cities in 24 countries and paid for the trip by performing Bach in the streets.  The real reason behind the trip was to raise funds for music education projects for disadvantaged children in developing countries. The most important take-away from that 100 000 km trip was flexibility. He couldn’t plan for more than a couple of days at a time and learned to live under hectic conditions, knowing that there would always be somewhere to spend the night, always meeting wonderful people, putting the outside world aside, regrouping and having a great experience.

The charity funded music projects over eight years. Two former trustees then went on to focus on supporting brass bands in Africa while David still stays in contact with music groups they helped in Africa and India. One of those groups,  the Hout Bay Music Project, is an essential visit for him on any trip to Cape Town

The coming months are looking busy for David with recitals with his duo partner Sarah Beth Briggs, performances of his own arrangement of Bach’s Goldberg Variations with virtuoso guitarist Craig Ogden and cellist Tim Hugh, as well as a growing number of festival appearances with the London Tango Quintet. The quintet, which David and Craig formed in 2007, includes the internationally acclaimed accordionist Milos Milivojevic and pianist David Gordon. “DG is a phenomenal musician. He’s as happy playing Coltrane as Vivaldi and is challenging us all to develop our improvisational skills. That’s definitely something for me to work on in 2022” he says. “Life is gradually returning to normal here and bookings are coming in. We may not be completely sure of things to come but it’s definitely beginning to shape up again. We are starting to exhale here. No pun intended!”

At least the performing arts in the UK had government support unlike their South African counterparts.

Let’s hope Juritz is right about the world turning to rights, and that all those who tell the CPO that they can’t wait to come back to concerts will come back – there are only about 380 tickets available in the hall, so don’t wait until it’s too late!