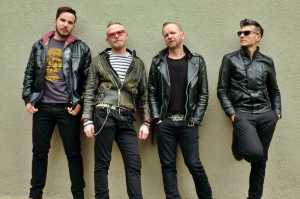 Café Roux in Noordhoek hosts an eclectic line-up over the next few weeks, covering everything from the blues to retro-pop and beyond.

Long-running band WONDERboom (pictured left) blast off on 7 January 2022. WONDERboom have released nine albums, headlined many major South African festivals and have been nominated for 5 Best Rock Album awards in the South African Music Awards. Although rock is the fundamental sound of the band, WONDERboom have also delved into different genres, ranging from funk through to punk and even Afro-dance. Cito, Martin Schofield and Wade Williams, the founding members of WONDERboom, have been writing songs and performing together for over 27 years and show no signs of stopping the rocking rollercoaster!

On 8 January Indie folk singer Sean Koch will be joined by Adrian Fowler for an evening of original compositions with a distinctively local feel. Hailing from Kommetjie in Cape Town. Koch’s music is a fusion of alternative folk, naturally blended into a foot-tapping, fun-loving country surf style. Playing the djembe from an early age taught him the rhythm and beat which subtly speaks through his smooth guitar riffs and softly sung lyrics

On 13 January  contemporary delta blues and roots artist, storyteller and traveller Doc Mclean will entertain at Café Roux. According to his report, Maclean “looks like your typical foul-mouthed, gun-wielding cowboy straight out of 1800s America. His voice is thick and husky, like hard liquor and a thousand cigarettes, but his energy is gentle and genuine.”

And then on 15 January, 3 Tons of Fun will be bubbling with energy – the three piece group with incredible voices, skillful harmonies and smouldering sensuality will give the audience at Café Roux a night of fun and entertainment.Classy costumes, big hair and makeup are the order of the day, accompanied by fave hits from the 60’s, 70’s and 80’s.

Most gigs are between 6 and 9.30pm. Booking is through Quicket.  Covid protocols will be in place.