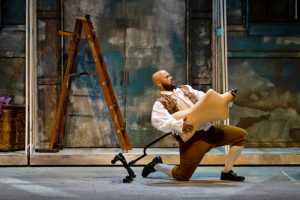 Not for nothing is Mozart’s Le Nozze di Figaro a perennial favourite of the operatic repertoire.

Replete with enchanting arias and brimming with mischief, it sweeps its audience along at a heady pace; from the chuckle of woodwinds in the overture to the joyous, wildly improbable finale, its lyrical grace cloaks both ridiculous farce and moments of poignancy. Seldom is audience credulity so willingly suspended.

This co-production from Cape Town Opera and Sempre Opera, while respecting the period of Mozart, manages to inject freshness into what could become predictable in less imaginative hands – an achievement due mainly to the innovative direction of Magdalene Minnaar.

She brings her signature skill for maximising the resources at her disposal in staging this opera, ably assisted by set and costume designer Maritha Visagie. Aided by Rabia Davids, the latter’s costumes are eye-wateringly sumptuous, and her rococo-inspired sets have a simplicity which conveys the spirit of 18th-century shabby-chic but enhancing, rather than diminishing, the impact of rich raiment and outré wigs. 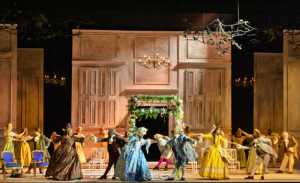 Another original touch is apparent in the surtitles, which while terse enough not to distract the audience, also hint at thematic content. An instance is a variety of decorative bird cages and an elusive key, suggesting the imprisonment (physical and psychological) that is a darker element of Le Nozze.

It says much for the calibre of Minnaar’s direction that this unabridged version of the opera does not outstay its welcome. Like Shakespeare’s great plays, subplots have their place in the context of the work, but can extend it beyond the attention span and goodwill of the average audience, a pitfall artfully avoided here.

This reading of Le Nozze is brisk and uninhibitedly sexy, in keeping with the spirit of the original and appropriate to the central theme of lust, betrayal and lechery.

With the support of magisterial staging, and sound musical accompaniment under the baton of Schalk van der Merwe, the cast do ample justice to their several roles. Conroy Scott as the eponymous hero is a delightful Figaro, full-voiced, authoritative and warmly expressive. His co-lead Brittany Smith (Susanna) continues to impress with strong characterisation matching nuanced vocal control; both are ideally cast in these key roles. 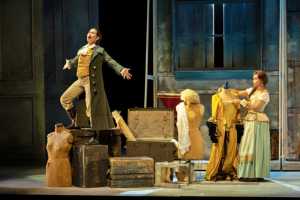 An exceptional contribution is that of South African-born baritone William Berger as the decadent and brutal Almaviva. However repellent his persona may be, his splendid delivery makes every appearance a pleasure. His powerful stage presence balances the vulnerability of the Countess Almaviva, interpreted with pleasing delicacy by Siphamandla Moyake.

As for Cherubino, newly transitioned lyric mezzo soprano Megan Kahts on début in the part makes it her own with gusto, playing the hormonal teenager to the hilt and singing boldly, a welcome inclusion in the array of colourful personae.

The intrigues of a subplot involving characters from Figaro’s murky past are given light-hearted  but professional treatment by Lwazi Dlamini (Bartolo) and the luscious Monica Mhangwana (Marcellina); Siphesihle Mdena cuts a fine figure as Basilio. Among secondary personae, the performance of newcomer Alida Stoman as Barbarina is noteworthy, suggesting a talent to hone for future roles.

If there were any grounds for dissatisfaction, they would be on account of the all-too-few appearances of the CTO Chorus – but that is the fault of Mozart, not this production.

Congratulations are definitely in order both to CTO and Sempre Opera as well as their generous sponsors, the City of Cape Town, the Judith Neilson Head Trust and Lift Airline. After the Cape Town run, Le Nozze di Figaro heads north to the Roodepoort Theatre for six further performances. Mozart’s magic lives on….