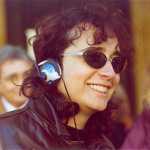 Laura Muscardin is an award-winning film director and screen writer from Italy whose movies includes Billo, The Grand Dakhaar and Days as well as the documentary Children of Rome Open City.

She has just completed her latest film, La guerra di Cam, but now finds herself quarantined in Rome as Italy goes into lockdown due to the Coronavirus. She tells WeekendSpecial what Life in a Time of Corona is like:

My initial positive onrush is in some ways being affected by the quarantine. One day is positive, the next more difficult to deal with. Today is a good day though. I am feeling better than yesterday when I dragged around the house complaining about everything and feeling in a trap and thinking about old movies like Hurricane in which the prisoner meditates and feels free and strong in spite of his unjust detection …

I am not like those heroes, shit on me.

The internet and Whatsapp are full of messages, opinions, interviews and debates. National Italian talking points have moved from sport and football (and a little bit of politics) to the Coronavirus. The daily reports of infected people have taken the place of the national football league results, and the different countries’ strategies to face the contagion are analysed and debated with the passion that was before dedicated to football championships and teams. 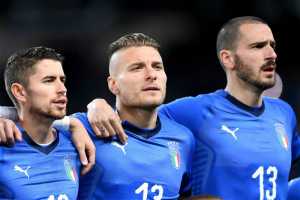 This world competition is now showing China in quite a good lead position, even though the South Korea team, after having started badly, has shown great unity and a good strategy. British coach Johnson tried an aggressive field approach, saying only the strong will survive, but apparently he is moving to make some corrections. France is difficult to analyse – there has been too much going on during these past years of Football Mundial cups between us. Denmark has chosen to deploy a team playing total defense, closing the borders. So have some other teams, so we will see what happens.

The supporters get out on their balconies and sing, and flash mobs are organised through the web. The other day everybody was supposed to play a song titled Azzurro – a very famous and very nice piece about a deserted blue-skied afternoon. It’s a kind of national historical song. But one of my neighbours did not understand and played another very famous song called Volare, very loudly. The words are: “In the blue … painted in blue …” It was very uncoordinated but people from the other houses applauded anyway. Blue was everywhere.

So last weekend was actually my first quarantine weekend. It went like this: My girlfriend  has a temperature so I wash and disinfect the whole house. She is confined to a bedroom and I move around pretending  everything is fine and that  I can become the Florence Nightingale of the building. Saturday morning a gloomy paranoia attacks me: first, I have to face my ancestral fear of being imprisoned; second there is the idea that she can have a normal flu, but it can also be the virus. I wonder which heavy drug could be useful, for me. I will try binge series watching, apparently it works fine. 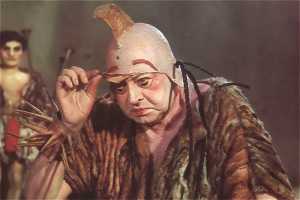 In the meantime, I try to have a small walk in the neighbourhood. I send a message to my brother who lives close by, saying can we meet and I can give him some DVDs since he’s  fiercely against Amazon and doesn’t use Netflix. Tough guy.

I am sure of  myself: “Train de Vie and Film Blu (Three Colours: Blue)”

I start doubting myself, but keep my voice steady. That medical mask is really valuable. I am wearing an old do-it-yourself one for home, theoretically to be used only once. I stare at him him firmly.

“And what about Film Blu by Krzysztof Kieslowski? Such a masterpiece …”

My brother is a dermatologist and I always thought he was not so cultivated. But he’s ready.

Gosh! I understand I have been underrating him. I try a large smile.

“That must have been long time ago. It’s good to watch films again isn’t it? And I saw at the newspaper stall they have some Fellini as well.”

“All right, I will go to the newspaper stall,” he says, and he hands me the green plastic bag with the mask  and takes the DVDs. Phew, I think. My brother is really generous, I have to admit.

Getting back to a safe two metre distance I ask him how are things going, when a policeman arrives and says: “Why don’t you go home to talk?”’ We move immediately onto different sidewalks.

It feels funny, he could have said: “Why don’t you use your phones?”

Once home, after I discover that many people can’t read or do the cultural things they planned, but are ending up in front of the TV, I surrender. I shall binge watch and get some moral strength to fight pessimistic thoughts. I can be a heroine just for the weekend! Yes I can.

Disaster! Today the parks in Rome were shut down. Knowing these were the only outside spaces people could go to, the situation had become risky – apparently people were asking their neighbours if they could “borrow” their dogs as an excuse to go out (dog walking was permitted in the parks, with a permit), but then we were having dogs which were “out for a walk” for the whole day, poor animals. 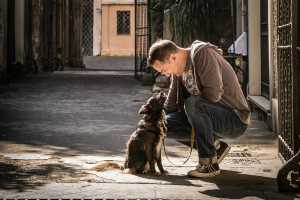 This morning I approached the park with Agata (my very alive and energetic black Cocker Spaniel) looking for a way inside, which I finally found. The moment I snuck in, however, a police car stopped and kindly invited me to get out. So I took one hour to get home instead and finally  had an exhausting and satisfying walk (for Agata), me pretending not to see the huge amount of garbage around us.

In Italy there are people who manically divide their garbage into glass/plastic/organic etc, and then there are people who throw old couches, mattresses and anything else (including objects you did not know even existed) in places just out of the view of the main street (and sometimes also in the view of the main street). I consider that on balance I am in favour of the independent throwers, since the walking was kind of adventurous.

Anyhow the national spirit stays high, even though an American doctor (for sure a Trump follower) said the virus is “an excuse for Italians to rest”.  People were hurt by this, also because our doctors are relentlessly working in emergency structures.  I think it is just envy, because Americans do not have a good social heath system, so wealthy Americans will be treated and the less wealthy will be purged. Plus they have terrible taste in food and fashion, everybody knows. 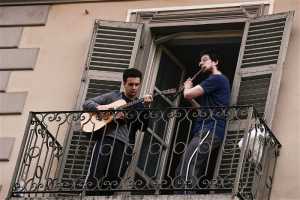 Talking of the national spirit, flash mobs are being organised via web so people open their windows and sing at the same time. They don’t always work out so well, though(see video below).

And family life can be difficult – even if someone writes he has spent the night at home with family discovering what decent people they are. Another clichè we have discovered is not true about ourselves was the idea that southern Italian people would have a huge amount of food at home. Apparently everybody is starting to stock up fast.

Here we are. The whole of Italy recently became zona rossa (red zone) and quite quickly we are moving towards the TV scenes from Wuhan which I was looking at one month ago without paying  great attention. China was so far away …

Italians are less disciplined than Chinese people, so our way of doing things is a little bit different I think.

First of all was the phase “why us first?” I consider two possible replies:

There are more reasons, I think; still I would like to see the sunny side.

So we are asked to stay  home, and only the essential people can get out – they are those who provide and carry food and supplies, and public offices. 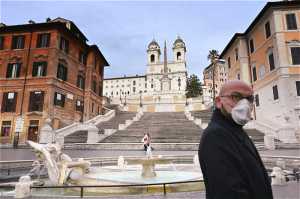 Doctors are in short supply, so after a long struggle between various political parties to send people into retirement (QUOTA 100 means if add the sum of your age and your years of work, and if you arrive at 100 you can retire earlier), doctors are being called back to work.

This new sense of community

I hope this big thing will push money back to public health, because for the first time after winning the FIFA World Cup we are all together again. It is a strange feeling, this new sense of community…

I just finished my latest movie and then everything stopped. God knows what will happen. The big question is – will Netflix be enough to entertain people stuck in their homes, or will there still be space for committed independent movies in the future?

In the meantime I am an outlaw since I moved from my house to stay at my girlfriend’s place, which is close to a park so I can take Agata my dog and have long walks.

Meanwhile, the national Italian humour is being bounced around on Whatsapp with thousands of funny messages …