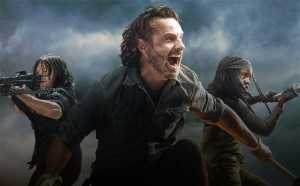 Feeling bored, locked-in, listless – then you need to consider the Best Series for Coronavirus Quarantine to lift your spirits. There’s nothing like watching other people with worse problems than your own. Whether it’s comedy, drama, action or horror, we’ve got a couple of great ideas for you.

You can get these via paid-for streaming services such as Netflix, Showmax and Amazon, or buy a box set online, or find out if you can rent (or borrow) locally.

Obviously! Of course you’re going to watch a series about a post-apocalyptic world where the zombies have taken over. Well, more like shuffled over, because in this version the zombies don’t move all that fast – hence being known as “walkers”. But apart from the fear of becoming a very slow zombie, human survivors also need to fear each other. Because after the fall of humanity (due to a virus), those who manage to live form different groupings with their own sets of laws – which frequently leads to conflicts. You would think there was a finite number of episodes about man vs zombie vs man – but the series is now headed for Season 11, with no sign of stopping.

Another clear-cut choice. Because these people really had it bad. The award-winning series is based on true events that happened on and after 26 April 1986 when the No.4 nuclear reactor in the Chernobyl Nuclear Power Plant in the Ukraine blew up. While casualties were kept to a minimum with the blast, the resulting toxic radiation fallout killed so many that exact numbers are still not known. It’s a brilliant series – bleak, but really good.

The dark satire of the Black Mirror series is an acquired taste, but once you start, it’s easy to get hooked. Each episode is a stand-alone, the only link being a riff on new technology – some of which already exists, and some of which is ever-so-slightly tweaked. The British series, created by Charlie Brooker, is set in an alternative present, or sometimes the near future, and can be both whimsical and alarming. Also damn dystopian at times. It includes a space adventure, a sci-fi romance, and a sinister chain game – and some of the chapters were shot in Cape Town!

Stephen King is the master of grim scenarios, and The Stand, based on his novel of the same name, is just a teensy bit close to the bone at the moment. It’s all about a weaponised form of influenza, called Project Blue, manufactured in a secret American lab. A lab employee unintentionally spreads the virus when he flees the facility, and it leads to the entire country being infected, with thousands of deaths. The survivors band together under two leaders – one good, one bad – and a battle for ultimate survival commences. It was made in 1994, but an update is due out any day now…

There actually are people who haven’t watched GoT – I personally know two of them. For those lucky virgins – prepare to be engulfed by one of the most epic series ever made (except for the final season, which everybody agreed was a rip-off). It’s got it all – bare naked ladies, bare naked men, beheadings and booze. Plus dragons, a dwarf, dramatic battles and incest. 73 episodes, eight seasons, and a steady stream of characters (many of whom die) keep this three-pronged storyline as gripping as it gets.

Once you’ve watched, you can also join the millions of viewers who use the over-cooked phrase: “Winter is coming.” Which sounds better then: “Covid is coming”.