For a little over a year, Mazza Restaurant has been delighting guests with its small plate interpretations of Lebanese and other cuisine from the region. It is one of the concept restaurants gathered together in the historic inner-city spaces of Local @ Heritage Square by hotelier Victoria Engelhorn.

Anchored by the Cape Heritage Hotel on Bree Street, Local @ Heritage Square is a culinary hub offering a range of food and drink experiences from burgers to yakitori.

There’s plenty to tempt the palate, from a stunning cocktail lounge at The Drinkery, to contemporary Italian at La Cantina, but Mazza is the jewel in the crown.

Overlooking the bustle of a central atrium, the little eatery is redolent of exotic spice and live-fire cooking from the tiny open kitchen. Chef Tevin-Lee Cooke and his team are about to release a new menu for Winter focusing on the flavours and street food of Beirut.

To ensure authenticity in their menu, Engelhorn reached out Lebanese food expert and cookbook author Sophia Lindop, who also teaches courses on the flavours and culture of her Levantine heritage.

“I know Victoria is very passionate about authenticity and hyper-local cuisine,” says Lindop, “So I thought I’d work with the team to develop an exciting and authentic menu that reflects the smells, textures and tastes of Beirut. The décor features a graphic of Beirut’s skyline and my love for that city and its food runs very deep.”

She goes on to describe her fascination with regional cuisines and the joy of working with two young chefs to explore small plate versions of dishes she loves. We didn’t want to do a general tour of the region, but rather provide an experience of the city through its food. It’s a kind of homage to Beirut. The idea is to transport you through the food and the vibe while you remain in your own back yard.

“Working with Sophia has been amazing,” offers Cooke “Using local ingredients to create the food of her heritage, with authentic spices and techniques has really taught me so much about what we can create in our tiny kitchen.” 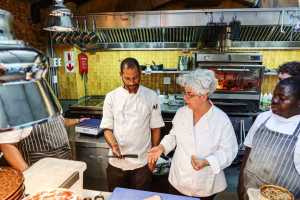 Among these Lebanese flavour and dishes from the streets and eateries of Beirut recreated by the Mazza team runs a rich vein of vegan and vegetarian fare.

“The people of Lebanon, and my beloved Beirut, tend to be poor. This is why there is such an emphasis on sharing and generosity. People gather at the table around a selection of dishes that are mainly plant-based, with an occasional meat or fish dish. There’s so much in the mix of a single meal for the vegan or vegetarian diet, and we’ve reflected that in the Mazza menu,” she says

Mazza Restaurant is open Monday to Saturday for lunch and dinner.