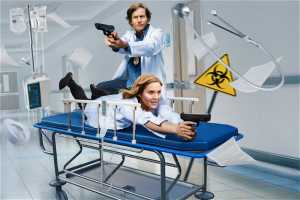 If you like comedy that’s definitely on the dark side, if you’ve watched Green Wing and never wanted it to end, and you enjoy send-ups like the Scary Movie series, then Medical Police will be just up your boulevard.

It’s a new Netflix series based on an older web production called Childrens Hospital; the idea is kind of like what Netflix did with Between Two Ferns, where an original cult production got updated and expanded. But this one works better, I reckon, probably because it sticks to a series format instead of dragging things out to suit a full film format.

Childrens Hospital was an alt-comedy series that dissed the medical drama genre (think Grey’s Anatomy, ER, St Elsewhere etc) with a cast of dysfunctional doctors, inappropriate nurses and inept administrators. It was set in a mythical pediatric facility in Brazil, basically the last place on earth you would ever want to bring a child.

Medical Police offers much of the same – including the cast and main creator (Rob Corddry) – but adds a new dimension in the form of a spy/thriller plot. So it’s essentially a send up of two genres. And it has its moments, for sure.

One also gets the impression the cast are totally enjoying this one. Mostly all Childrens Hospital alumni, they’re basically back in character playing badass medical personnel. What’s more, it looks like a second season could be in the works.

So, if you’re in the mood for slightly surreal alt-laughs, Medical Police may do it for you.