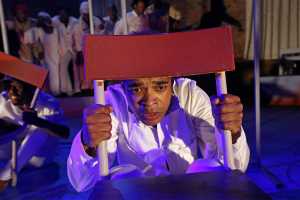 Physical theatre at its most dynamic rewards the audience of G7: Okwe Bokhwe with ever-changing visual stimulus throughout this work’s duration. Even before the action has begun, there is an oneiric aura created with the simplest means: a space contained by white sheeting, swirling mist and dim lighting; a cage containing figures in frozen animation, and two frenetically busy white-clad workmen whose energy contrasts alarmingly with the statuesque group behind them.

By the time the show gets under way, theatre-goers’ curiosity is thoroughly aroused, and their attention is retained thereafter to the end. An attractive girl (off-stage) asks the cheeky workmen for directions to the monument commemorating the Gugulethu Seven, which brings us to the crux of the play’s subject-matter: dealing with a bloody past. 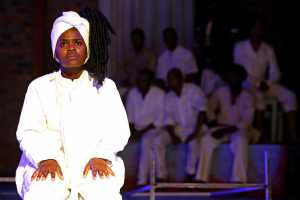 Sacrifice is a key concept which explains the title (Okwe Bokhwe means “ goat-like”), and the sacrificial goat is a polyvalent symbol of spiritual appeasement as well as incarnation of evil which disappears when slaughtered. The question is, “What does posterity make of that slaughter/sacrifice, and how is healing accomplished?”

A major strength of this production is its mobility of stage-set, suiting the mercurial mood-swings of the action. The seven frames initially forming the “cage” variously morph into picture frames, (one for each activist stepping forth to announce his or her name and age – all under 30); outlines of buildings; and commemorative panels in the monument. A disturbing soundscape enhanced by poignant singing, together with Themba Stewart’s well-conceived lighting design, creates a nagging sense that all is not as it should be in our ambiguous present, an unease at variance with the robust humour that occasionally lights the darkness. 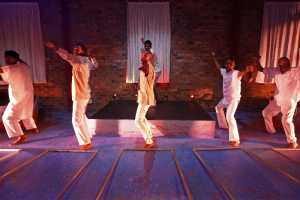 Best of all is the unflagging stamina of the cast in their response to the relentless pace set by Mandla Mbothwe, and their execution of Jennie Reznek’s admirably devised movement, which, complemented by Mzo Gasa’s choreography, obviates the need for dialogue.

If there was anything further needed to improve this impressive production, it would be more light and shade: there is very little silence or stillness in the play, but when they occur, their impact is greater than the noise and manic activity of their context, and could be used to better advantage.

Other than that, Magnet Theatre is to be complimented on yet another memorable achievement with G7: Okwe Bokhwe.

See previous Magnet reviews:
Every Year, Every Day, I am Walking