Two little Welsh girls in trouser roles all but steal the spectacular Tiger Bay the Musical which opened at the weekend in the Artscape Opera House staged by Cape Town Opera in association with the Wales Millennium Centre where it will be presented later this year. 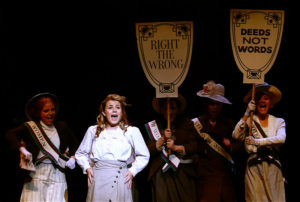 Louise Harvey (9) and Ruby Llewelyn (11) act and sing their boots off in this dark, gritty and powerful new music-drama, which has more in common with Les Miserables than a romantic, frothy musical. Coal is at the centre of the plot and serves as an apt description. Coal black coal is slow to burn, produces a glow when it gets going and finally sets the theatre alight as the audience are drawn into the lives of the miners and their stories of conflict, love, sorrow and reconciliation.

From the response Tiger Bay will go far. It needs trimming, tweaking and one unforgettable song, but it has the dramatic punch to be another Les Mis.

When Coal was King

This would be an ostrich feather in the cap of author and librettist Michael Williams. Without an original source like a movie or a book, he conceived the plot through imagination and research in Wales, successfully bringing to life the years when Coal was King and Tiger Bay, the dockside area closest to industrial Cardiff, a melting pot of humanity. More than 50 languages could be heard in the vibrant lanes and allies at the turn of the last century.

Williams telescoped events into the years 1899 to 1919 to allow him to keep alive John, the Third Marquis of Bute, who through his coal mine had become the richest man in the world. Now paralysed by grief and illness he has withdrawn to his castle, leaving his self-serving subordinates to run the mine. 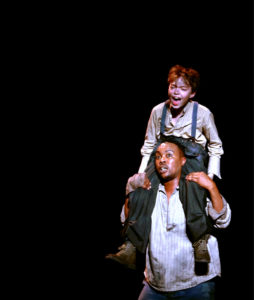 Much of the musical is, however, fact. Child labour, racial discrimination, and the Havannah, a ghastly run-down school where waifs and stray children were beaten and starved, did exist.

Williams described writing a musical without a composer “like getting married before you’ve found a spouse”. Luckily he found the perfect bridegroom in Welshman Daf James to convey the multi-facets of the plot with modern, listenable music suitable for solos, lively ensemble singing and dancing, tragic moments and religious solemnity for the celebration of St David’s Day. A 20-piece orchestra, under musical director David Mahoney, put over the score with distinction.

The musical’s brilliant opening defiantly throws everything at the audience. It starts with deceptive calm as one of the two little Welsh girls wander on to the stage dominated by designer Anna Fleischle’s immense adaptable set of a huge ship with thick anchor chains on either side of the bow. Suddenly a door opens. There’s a roar of fire and out of a hole pour a succession of men struggling to push their loaded coal wagons to tip the contents symbolically into the orchestra pit.

The noise is deafening. The coal miners are singing. You don’t hear their words because another group of angry men have appeared and are singing a different song. Quickly you get the picture. In Wales at the turn of the last century Coal was King, but Labour was rising as the Great Dictator.

Miners wanted better pay and conditions but with the unemployed snapping at their heels for their jobs they had little bargaining power. The unions were growing in strength and threatened strike action and the ineffective mine managers were playing their own game. 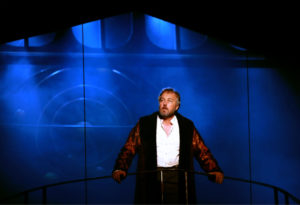 Into this complex scenario comes Themba (Luvo Tamba), an immigrant from Africa with a heart full of revenge after losing loved ones in Boer War camps. He is grudgingly accepted as a Donkeyman to haul the coal wagons when Ianto, one of the Water Boys (played by the two Welsh children) offer him their help. Water Boys cleared the rail tracks with water and pig’s fat to make the gruelling labour easier for the Donkeymen. Themba and Ianto become a team and the plot has lift off….

In a star-studded cast, carefully welded into a superb unit by directors Melly Still and Max Barton, there is only space to mention a few: Vikki Bebb as Rowena Pryddy, the feisty diminutive blonde bombshell with a lovely personality and soaring soprano; Judy Ditchfield as the hoity-toity fake spiritualist, who later is unrecognisable as one of the tormentors of children; Noel Sullivan as Seamus O’Rourke, the controlling double-dealing harbour master but with a softer side which Rowena exposes. He eventually gets the most appalling beating at the hands of Themba, a tricky role for Luvo Tamba who has so much anger, caused by grief, that he mostly seems to be on the attack.

The show’s star, tenor John Owen-J ones, a famous Jean Valjean in Les Mis and a West End Phantom lived up to vocal expectations as the troubled Marquis of Bute III but the role does not offer him enough acting challenges for his status and ability. 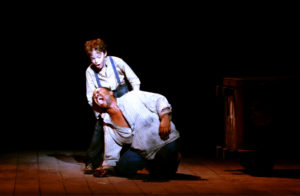 The whole musical touched me greatly. Last year I cycled in Wales above the village of Aberfan, near Merthyr Tydfil, where on October 21 1966 the catastrophic collapse of a colliery spoil tip killed 116 school children and 28 adults, so the story of the coal miners ‘ struggle for a better life has special meaning. Merthyr Tydfil was one of the places where the coal miners took to the street calling for reform and higher wages.

Miners in South Africa are also struggling for a better life. One hopes this will be achieved without the Pyrrhic Victory that occurred in Britain when Margaret successfully broke the power of the unions leading eventually led to the closure of the coal mines and the once green valleys becoming silent.

One last comment: the shadows on the walls of the set were wonderfully atmospheric, appropriately designed, I thought, by Gearhouse Splitbeam.