Satin to Sequins – More than a Minstrel, a new production which aims to de-stigmatise the perceptions and culture of the Cape Town minstrels will open at the Baxter Theatre. Directed by the award-winning Alistair Izobell, it will run from 28 June 2018. 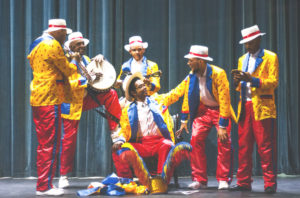 Written and produced by Oddball Concepts, the cast is made up of Carmen Maarman (Aunty Merle The Musical, District Six -The Musical), Carlo Daniels (Kat and the Kings, District Six Kanalla), Austin Rose, Tashreeq De Villiers, Shadley Schroeder and Ashtevahn Mintoor, accompanied by a live band.

Fictional character Mr Biggs and The Woodstock Darlings first entertained crowds in 2014 with a behind-the-scenes look at what it takes to run a minstrel troupe. This 2018 reworked version of Satins to Sequins – More than a Minstrel will also show the human side to the minstrel, so often misconstrued by many. There is more to the guy in the satin suit – he also pays taxes and he also struggles with love and loyalty.

Director Alistair Izobell has a long-standing history with the Klopse competitions and is fascinated by the unique creole sound. “The influences of these rhythms and sounds come from various sources that go back to the Cape’s early history – American, Dutch, Khoi, Asian, African influences all played a vital role. This production will be our interpretation of those influences.”

Regarded as a highly competitive sport, the minstrel ‘Kaapse Klopse’ circuit includes two months of singing competitions, and the troupes compete for no payment at all except for what is generally referred to as ‘bragging rights’. Furthermore, preparation for this usually happens all year round.

What: Satin to Sequins – More than a Minstrel