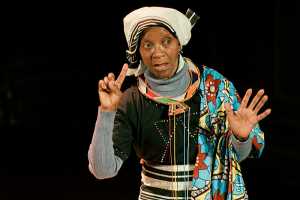 One SA’s leading storytellers Sindiwe Magona’s Kwathi ke Kaloku/Once Upon a Time has been featured on the virtual National Arts Festival (NAF) Fringe programme. Audiences can click here to access the show until 31 July 2020, at a cost of R25.

Produced by the Cape Town Music Academy, the production features a stellar cast together with internationally celebrated author Sindiwe Magona. Kwathi ke Kaloku/Once Upon a Time is an English and isiXhosa children’s production written by Magona. The 45-minute long production has English subtitles and includes a traditional score composed by Bongani Sotshononda and his United Nations of Africa band.

Magona, along with two actors, performs a combination of two of her most popular stories, The Best Meal Ever and Stronger than Lion to the live soundtrack of Sotshononda’s beautiful indigenous music. The story is of a family in Gugulethu, a township outside Cape Town. With their mother having to visit a sick family member in the Eastern Cape, a big sister, Siziwe must take care of all her siblings, with dwindling food supplies. When she realises that the food has run out, she must derive a plan to help her young siblings and to stave off extreme hunger. 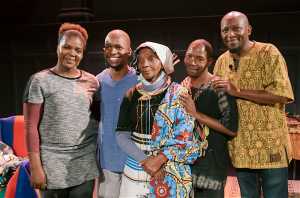 “Our story is one of hope and courage, teaching children to never give up and that brains are much stronger than brawn,” says Sindiwe Magona.

“The production entertains and educates children through the power of the imagination and in turn preserves and documents the rich Xhosa tradition of storytelling as well as the wealth of indigenous Xhosa songs,” says Magona.

She concludes: “The child who reads or hears stories especially in the mother tongue is much more likely to meet herself in books; see, hear and learn from characters who remind her of herself, people like her, situations and problems familiar to hers.”