Skemerdans is a Cape Flats neo-noir murder mystery set at the Oasis jazz club, the centre of a power struggle between two brothers, a scorned widow and an organised crime syndicate. It starts on Showmax on 28 April 2021. 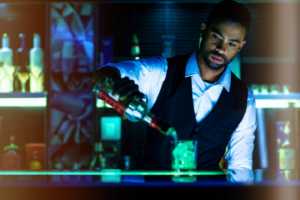 We caught up with Skemerdans co-directors Amy Jephta and Ephraim Gordon to find out more about their upcoming Showmax Original:

Where did the idea for Skemerdans come from?

Amy: We love the noir genre, so we had an aesthetic in mind. We wanted to create something that felt different to any South African show we had seen. A lot of the shows here are so bright, whereas we found there was something so beautiful about playing with darkness and shadows.

One night we just took a drive down Voortrekker Road for a location recce and we thought, ‘This place has so much life; so many stories in the cracks.’ We don’t think it’s been seen on screen before, so part of Skemerdans came from wanting to tell the story of this world.

And then the other part was we just wanted to tell a really sexy story that was different from anything anyone expected from us. Barakat, my first feature, is a gentle family story about love, so this is the complete opposite.

Ephraim: We also wanted to show a side of Cape Town we don’t normally see, to share our vision of what Cape Town is. When people think of Cape Town, they think of it as a compartmentalised world: certain people living here, certain people there. But Voortrekker Road is a place where different people are constantly moving through.

Club Galaxy has arguably been Cape Town’s most famous club ever since it opened in 1978. Did you write Skemerdans with Galaxy in mind?

Ephraim: Yes, but without knowing if it would be possible to shoot there. When Covid hit, the club obviously had to close, which made it the perfect space for the world of Skemerdans to exist.

Galaxy is a rite of passage in Cape Town. I grew up in Paarl, so never went but I always heard of Galaxy. And then when I became a student, and started going with friends on the Cape Flats, it was like finally being able to touch this place you’d always heard about.

Amy: I grew up in Mitchell’s Plain. I wasn’t allowed to go clubbing in high school but Galaxy and Dockside are the two venues I know from my childhood as part of the lexicon of Cape Town. Galaxy is an iconic part of Cape Town nightlife – everyone I know has either spent their youth at Galaxy, or their parents did. My grandmother partied there. It’s an institution.

And your family’s played on stage here, Amy?

Amy: Yes. In the late 70s and 80s, my father used to be part of a band called Hot Property. They used to play at the jazz and pop clubs, a Friday, Saturday and Sunday night gig, like the guys on our show.

Later in life, I have memories of coming to watch the jazz there, at West End. My brother, Benjamin Jephta, is a jazz musician – he’s actually doing the music for the show – and he had his training ground with these iconic musicians on the West End stage.