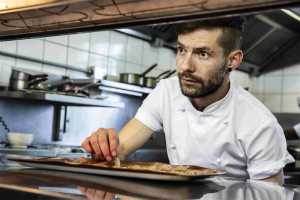 From April 2019 onwards, patrons can embark on either a full tasting Journey or a less extensive Discovery experience. Both menus are as inventive as ever, and enhanced by stimulating presentation, plating akin to artistry, and an incredible array of flavours.

Earlier in his career, Hirsch served as Sous Chef at the Greenhouse before moving on to roles as Head Chef on North Island in the Seychelles and at the Four Seasons in Johannesburg. He returns to his former kitchen with fervour, his consummate skill borne out in the newly conceived seasonal offering.

“With our winter experience, the aim is to continue the Greenhouse’s sterling reputation for sourcing unusual, meaningful ingredients and lending them an extraordinary treatment,” Hirsch comments.

The nine-course tasting Journey comprises a duet of conceptual canapes, a trio of intriguing starters, a single main followed by a traditional palate cleanser, and two desserts. Both vegetarian and vegan options are available. You can elect to pair either tasting menu with specially selected wines.

Almost every course has a willfully South African element that pays homage to its culinary context. Guests will delight in the gourmet mielie pap that is served with Springbok. There’s minutely grated boerenkaas from a local cheesery in the delicate cheese-and-tomato “sandwich” that is really an airy, wafer-thin canape. The dark chocolate truffles are crafted from Klippies and Coke. A local MCC Brut dazzles in the granita – a traditional palate cleanser made in a decidedly avant garde manner right at your table, by whipping liquid nitrogen into a syrup of lavender blossoms and bubbly. Sour fig accompanies the Cape octopus. And so on… 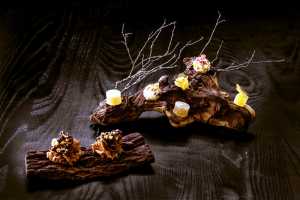 Then there’s a dish particularly associated with the Greenhouse, titled “the butcher bird’s pantry”, which continues the amplification of the local. A unique presentation device hammered out of copper and made to resemble an Acacia thorn bush upon which a “butcher bird” or Fiscal Shrike would stock its insect kills, is used to “spear” a selection of morsels. Greenhouse has retained this unconventional plating on the winter menu, peppering the “thorns” with quail tacos and truffle-stuffed quail eggs dusted with pastry.

Highlights of the Greenhouse Winter 2019 menu include an inspired pork Confit that melds French cooking techniques with Asian tasting notes. The tender XO pork belly has an aromatic walnut and ginger glaze and is served alongside a silkily textured, slow-poached egg cooked carefully at 62 degrees, and slivers of braised shitake mushrooms. Theatricality enters the arena in the form of the ponzu sauce, which is gently warmed over a burner at table. A gold-leafed, translucent disk of tomato gel dissolves into the sauce before it is poured over the pork to finish the dish. 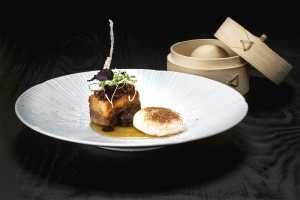 To soak up the remaining flavourful sauce, bao buns are steamed and served in a bamboo basket and left till last. These bread bites imaginatively function as a type of hand-held ramen and boast a superbly dense texture that harks after ujeke (African steamed pot bread), in a typically Greenhouse nod to all that is local.

Joining the XO pork as a newcomer, is the winsomely irreverent pb & j dessert. Tiny elder flowers dot the surface of a peanut brittle round that encases a frozen peanut butter mousse resting on a tart berry compote. It comes with a “glass of milk” – a shot of milky ice topped with foam. Like everything else on the Greenhouse Winter 2019 menu, it provides both visual delight and stimulation to the palate.

What: The Greenhouse Winter 2019 menu

Where and when: From April 2019 at the Greenhouse, Cellars-Hohenort, Constantia