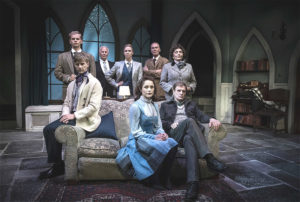 Confession. I have never seen The Mousetrap before. Which, when one considers I’ve spent over 30 years catching theatre on three continents, is somewhat crazy. I’ve walked past the posters in the West End. And it’s even been on in Cape Town before. But somehow, The Mousetrap has been missed.

Up until this summer season, I am happy to say. Pieter Toerien is presenting the production at his Theatre on the Bay, and I have finally been initiated.

Why the worry about not seeing it, you may ask? Well, it’s the longest-running play in London, having opened in 1952, and is very famous for this fact. So just for this reason it’s worth a ticket. Ask Quentin Tarantino – he’s been (and some say it inspired his movie The Hateful Eight).

Also, The Mousetrap is written by the queen of murder mysteries, Agatha Christie, which is another very good reason to go. You’ll most definitely be trying to figure out who the baddy is, by the time it’s interval. And, in this production’s case, the show features a great cast who’re clearly all having a great time on stage. What’s not to like?|

The plot is pretty simple – until it’s not. Mollie (Melissa Haiden) and husband Giles (Mark Sykes) have opened up a guest house in the countryside, and are welcoming their first batch of visitors. These include the architect Christopher Wren (not the one, but the same name), fussy retired magistrate Mrs Boyle (Michele Maxwell), military man Major Metcalf (Malcolm Terrey), self-assured Miss Casewell (Shannyn Fourie) and unexpected addition Mr Paravicini (played by British actor Mark Wynter).  The weather has turned foul, and as a result they’re trapped in the guest house. 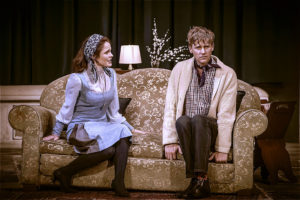 Meanwhile in London, a woman has been murdered, and a suspect is on the loose. According to district Detective Sergeant Trotter (Aidan Scott) he could be headed to the guest house. So the valiant copper puts on his skis and battles a snow storm to get to the venue. Once there, he warns the guests that they may be some danger. And that the the danger could come from within the guest house itself.

Next thing, in true Christie style, there’s another corpse. And the quest is on to find out whodunnit.

I am absolutely not going to go any further, other than to say Ms Christie has a helluva lot of fun flinging around red herrings, and we the audience are equally engaged trying to solve the mystery.

And, as mentioned, this is a fine cast, who rise to the occasion with great timing and, most importantly, a sense of the actual time of the piece. This is a period play, set in the year it was written, and it reflects the sensibilities of that era. People smoked inside, for goodness sake!! And it’s all carried through with grace, by the cast, and by both the set and costume designers (Nadine Minaar and Marcel Meyer respectively).

I’m extremely happy that I have finally seen The Mousetrap – it was worth the wait, and a really fun way to spend an evening at the theatre. Don’t wait too long for your chance to see this classic!

What: The Mousetrap review