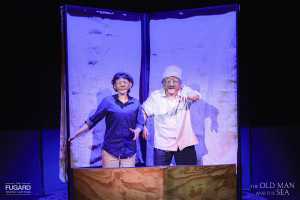 So it was with unanticipated delight that I absorbed the Contagious Theatre production of The Old Man and the Sea. I shouldn’t have been surprised, though, having seen what they did with another literary gem, Paul Gallico’s The Snow Goose. That treatment – also with a sea theme, funnily enough – should have prepared me for an unorthodox approach to Hemmingway’s classic short novel. Still, I was happily surprised.

A simple but oh-so-clever set, several masks, and three actors – that’s what it took to hook me in. Oh, and Sue Grealy’s remarkable soundtrack/soundscape, moving from a Latin lilt to whispering waves, all in complete sync with the drama of the story.

It’s set in a sea-side village in Cuba, where ageing fisherman Santiago has gone 84 days without a catch. The villagers reckon he is on a losing streak, and his young handlanger Manolin is told to abandon him and work for the more successful fishermen. But the boy is devoted to the old man, and believes his luck will change. On the 85th day Santiago ventures out alone into the Gulf Stream, where he is to meet a marlin that will become the stuff of legend … 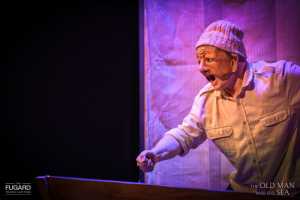 Actors James Cairns, Taryn Bennett and Jaques De Silva wear human half-masks uncannily designed by Jenine Collocott to become a rage of different characters who assist in telling this tale. There’re the village fishermen, the local tavern owner, and of course Manolin and Santiago, encapsulated perfectly through unique physical gestures and tonal dynamics. Each actor is clad in a uniform of plain khaki pants, leather sandals and shirt, but such is their skill in inhabiting each role that it’s very easy to “see” the person they’re playing underneath. All three inhabit their characters with a familiar kind of affection, and it’s almost impossible not to respond empathetically.

All in the delivery

Collocott’s set is another modest touch – like the costumes – which proves to be deadly effective. Set on a revolving circle divided into three spaces, it can be spun around and then locked into place. Suddenly one is on a driftwood-scattered beach, or sitting at a tavern, or sailing in a boat! With the most basic of touches – a table and chairs,  a jutting prow – a mini-world is created. It’s mesmerising.

As are the trio of actors, each with their own particular presence. Stunning.

By the end of this remarkable one-hour show, a classic has been re-created from what was originally a macho root, into a magical blossoming. It’s Hemmingway’s story, but it’s Contagious Theatre’s telling, and it’s all in the delivery. Turns out it didn’t matter whether I was a fan or not – the show speaks for itself.

What: The Old Man and the Sea