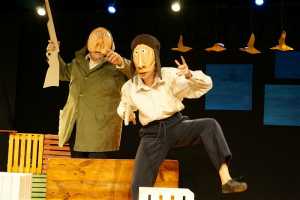 It was around five years ago that I first saw this version of Paul Gallico’s The Snow Goose. It moved me immensely at the time – the story being a familiar and much-loved part of my childhood, the adaptation a clever, out-of-the-box take on the tale. And it was with a deep sense of satisfaction that I left the theatre this second time around – the play has lost none of its punch during its hiatus, and remains an engaging, poignant and simply delightful piece of work.

Created by director Jenine Collocott and actors James Cairns and Taryn Bennett, The Snow Goose traces the unlikely relationship that grows between a young girl, a solitary artist, and a beautiful bird. Set before and during the second world war, in a small seaside village in England, this odd friendship develops when Frith (Bennett) brings a wounded goose to reclusive painter Philip Rhayader (Cairns), and together they heal the bird. Rhayader is looked at with some suspicion by the local villagers, mainly due to his isolation and because he is disabled. Frith herself is a lonely young girl, brought up by her gruff Dad after her mother dies. Their bond to each other – and with the bird – grows delicately, almost innocently, one could say. But the looming threat of war, and its inevitable arrival, intrudes on this fragile accord, bringing out the best, the brave and ultimately the tragic in all parties. 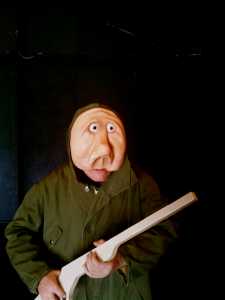 A range of orbiting characters

Staged on a spartan but multi-functional set featuring a number of wooden boxes, which cleverly transform into anything from a post office to a sailing boat, the story is told not only through the two protagonists, but via a range of orbiting characters. Frith’s Dad, his hunting buddy, the post mistress, the recruiting captain, a rescued soldier and assorted newsreaders drive the narrative along, interspersing humour with historical fact. And thus we learn of the evacuation of Dunkirk, and the call for all sea-going craft to come to the aid of several thousand stranded British soldiers …

Cairns and Bennett are remarkable in all of the roles they take on, most movingly as Frith and Rhayader, but in all other parts as well. The use of half-masks to effectively denote each different character is striking, with body movements and accents carrying the image through. The pace is fast, and within an hour or so, the story is told. Leaving a remarkable residue of both sadness and joy in its wake.

A wonderful piece of theatre. Thank you – once again.

What: The Snow Goose