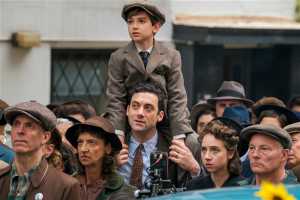 This brand new, six-part adaptation of Phillip Roth’s novel is a riveting, moving, and so deeply unsettling reimagining of history.

IMDB says, “The Plot Against America imagines an alternate American history during World War II, told through the eyes of a working-class Jewish family in New Jersey as they endure the political rise of Charles Lindbergh, an aviator-hero and xenophobic populist, who captures the presidency and turns the nation toward fascism.”

Re-imagining history is a massive task, and here the creative team of David Simon and Ed Burns (The Wire) bring it to its full vision.

A brilliant cast, including my favourites, John Turturro and Winona Ryder, do an extraordinary job of creating this Jewish community in Jersey, with all its ups and downs, family feuds, and differences of opinion, set against this alternative political backdrop that resembles a current America all too closely. It is pretty scary stuff, the creeping, slow boil of fascism and anti-Semitism and the cruelty it brings.

The setting and style of Jersey in the late 30’s and early 40’s (WW2), with the radio voices, cars, clothing and houses is so well created. This makes this version of history so believable.

Then there are the performances of the children. I am not a huge fan of child actors but the kids here do the most extraordinary jobs. (I love that the lead little boy plays a character called Phillip).

The war, the Nazis, Lindbergh’s shallow excuse for not getting involved in the war, the rabbi so desperate for assimilation he refuses to see the signs, the desperate mother whose fear can’t trump her husband’s outspokenness, the gullible sister, the divided sons… The Plot Against America successfully combines the personal and political in a harrowing warning for us to recognise our own time and its bleak truth.

What: The Plot Against America