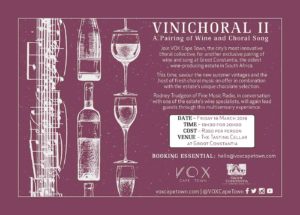 In this great wine producing country it’s (almost) obligatory to sip wine before a concert. One or two people may even munch a chocolate during the performance. However, marrying music, wine, chocolate (MWC) into a multi-sensory experience in one evening, is not normal practice.

Yet, this is precisely what John Woodland’s Vox is offering lovers of these “foods for the gods” at their ViniChoral II happening in Groot Constantia’s Wine Cellar on 16 March. 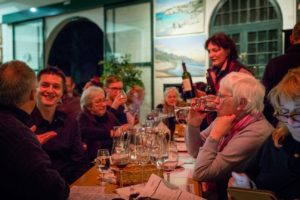 Says Vox director Woodland, “Last August our first wine and music pairing in Groot Constantia’s Wine cellar proved such a success we’ve decided to repeat partnering music to wine, adding in Groot Constantia’s unique chocolate selection. Naturally our choral music differs from our previous programme. So too will the wines up for savouring, while chocolate master Annelize Morkel matches chocolates to complement the music and wine.”

“Once again we are honoured that Rodney Trudgeon, Fine Music Radio’s star presenter, is available to link our choral pieces to summer vintage wines. Wine connoisseur Karen Woodcock will guide patrons’ taste buds to seek out those subtlety hidden flavours in Groot Constantia wines – and as before, three white and three red wines will be on trial” 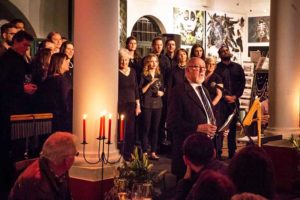 Music and wine go back into the mists of time, but where does chocolate fit in? “That’s too big a question to answer here”, replied Woodland, “but I’ll try to give a brief outline. Starting with music. According to archaeologists earliest finds of music began in Africa about 55 000 years ago with the “voice” – the first known instrument. That’s one reason why we call our choir Vox – in Latin it means voice.”

“So from pre-historic music practices through Biblical times through ages right up to the 20th and 21st century, religious and secular music has developed into the sounds we know and understand music to be today. Archaeologists believe they found the first wine producing winery in Armenia dating to 6100 BCE.  When Greeks began worshipping Dionysus, and Romans worshipped Bacchus, wine became part of religious rites. As it continues today to be in Jewish and Christian practice.”

“Chocolate? Well that’s a bitty younger. It dates from 1900 BCE in the land known as Mesoamerica. That’s where Aztec’s believed that cacao seeds were the gift of Quetzalcoatl, their god of wisdom.”

Woodland emphasises the above comments are only the simplest backgrounds to music, wine, chocolate, but they outline why they are three fundamental essentials to our heavenly human way of life.

ViniChoral II’s programme comprises composers from 17th century Daniel Friderici to 20th century Franco Prinsloo. Wines range from MCC, Sauvignon Blanc, Pinotage to Gouverneurs Reserve (estate’s flagship). At R350pp ViniChoral II looks like another unique Vox experience to be enjoyed by all who bend towards a daily dose of music, wine and chocolate.

At additional cost a pre-concert meal is available at Groot Constantia’s restaurant and/or their Bistro. ViniChoral II ticket holders will be offered a free bottle of wine.

Breakfast at the Conservatory restaurant