Experience The Cape Camino and The Way of Table Mountain first hand.

For many, a Camino is finding the sacred – primarily within. This is why the great pilgrimages all have sacred destinations – Mecca in Saudi Arabia, Santiago in Spain, 88 Temples (multiple sites) in Japan, Route of Saints in Poland, and many more. Each is hosted by a religion or world view providing the sanctuary that a pilgrim needs. 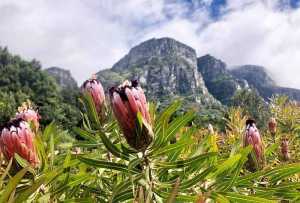 South Africa is home to a diversity of sacred practices, so it is fitting that Cape Camino’s final destination is majestic Table Mountain, a natural wonder representing grace to a range of sacred disciples.

The area’s first people, the Khoi and the San, who celebrate the divine via our natural world, believe the mountain to be home to God. They refer to this natural wonder as Hoerikwaggo – Mountain of the sea – Maker of rain and covered in clouds.

The iconic South African feature is also believed to be the globe’s earth wheel – emanating energy and light for the planet.

The seven chakras are represented along the peninsula – each with sacred power and purpose.

Islam holds all of creation to be sacred including nature – proximity to the rivers and streams, underground wells, or any water source abundant from the sacred mountain were identified as sites to bury the Sufi scholars who retained the faith in the Cape. This is due to the Islamic adage that cleanliness is next to Godliness.

St Georges Cathedral, known as “The People’s Cathedral”, was built, on a ley line, out of sandstone from the mountain. The cathedral serves many people from diverse backgrounds and is the oldest Cathedral in Southern Africa.

Whatever your faith, anyone playing, praying, or employed in her view or shadow will be a testament to her power. Cape Camino honours this sacred site as we walk with her as a destination on our South African pilgrimage.