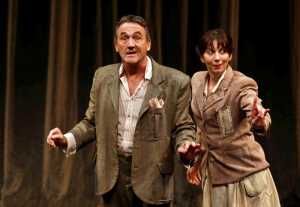 I feel like I am sharing a secret with you, writing this. I am sharing the dream of what theatre is when it is real. That suspended time when you are so in love with the people you are witnessing, both real actor and character, and what they say and do, and the words that bubble up, and the flutter of hands through air, and a tiny black peep square in a long grey drape, and the music that spins things in and out, that you feel like it is your life being pulled by tiny threads and scooped into being and floated into life and love.

I forgot everything sitting in the Flipside at the Baxter. When Ferine and Ferase (Sylvaine and Andrew), in their whimsical, old fashioned and almost clown clothes, swept in like a tiny theatre tornado, they took us behind the curtain (the one with the peep hole), the first curtain, and played out with bodies, and eyes, and rhyme and voices, and looks and jumps, and perfect timing, the story of two strange couples in two totally different houses, and the sadness of a love story borne of struggle, and united by stones and fireflies, I was taken. Taken in. Taken up, taken with. 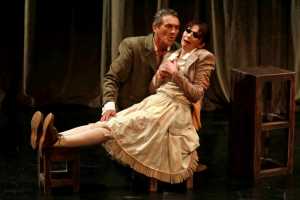 Everything about this production is genius

Everything about this production is genius. Tony Bentel is the perfect live accompaniment (unfortunately, where I was sitting, I had to stretch to look at him and sometimes I forgot, because I wanted to see him always). Toni Morkel’s direction is genius. It feels like a musical score, floating, unpredictable, detailed, and so perfectly balanced. Toni Morkel manages to direct a radio aerial to perfection. Wolf Britz’s set is misleadingly simple; it has wonderful tricks up its sleeve. But it is Andrew and Sylvaine who are everything. From the countess and her short husband’s weird ‘Gru from Despicable Me’ accents, to their layered love language between characters, from their physical whimsy to their vocal agility, they are everything. Everything.

Firefly is unavoidably sad. And joyous, and complicated. I laughed out loud, I aahed and oohed. The man next to me (with a seat between us for forgotten Covid) dropped his phone and didn’t pick it up until the end.

Firefly will make you fall in love with theatre again, will inspire you to return to it, and will keep you hoping it will always be like that. Elusive, heart stirring, magical and real.