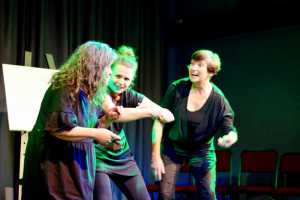 We at ImproGuise have been champing at the bit. We miss performing! says MEGAN CHORITZ. Finally we have secured three nights in August, Thursday 4, Friday 5 and Saturday 6, at the gorgeous Galloway Theatre at the Waterfront Theatre School, and we will be improvising our hearts out in front of what we seriously hope will be 100% capacity houses.

Our ImproGuise troupe has a special place in the hearts of improv and theatre lovers in Cape Town. Performing on stages across the peninsula since 1993, ImproGuise brought the popular TheatreSports to Cape Town before branching out into all forms and formats of exciting, hilarious and magical entertainment.

The Style High Club is our homage to movies, theatre and TV, and each night is a different format allowing us to deliver what our audiences love. That Kung Fu set in a laundromat? The Jane Austen with the eleven miserable goats? Anything is possible, and you, our creative audience get to give us suggestions to make your wildest ideas come to fruition like never before.

Here is a detailed breakdown of each of the nights! Book for one, or all, since every show is totally, completely, outrageously different:

Thursday 4 August: A Night at the Movies
Anything goes as ImproGuise presents everything to do with made up movies. Scenes from the latest never-seen-before films, interviews with casts and directors, songs, deleted moments, bloopers, flashbacks, surprising cameos, strange props, weird music, curious special effects.

One of our audience favourites, five improvising directors compete against each other for the last one standing in Superscene. Each director pitches their idea to the audience and the improvisers perform a scene from the ‘film’, with the least favourite getting ‘cut’ until the audience sees their choice of Superscene in a grand final scene.

What: The Style High Club – ImproGuise