The Northern Lights, or Aurora Borealis – “nature’s spectacular light phenomena” – is a sight denied South Africans unless they fly half-way across the world to the Baltic States, Iceland, Latvia, Alaska or Norway.  So why has John Woodland, founder and conductor of Vox, titled the choir’s next presentation Northern Lights – A Baltic Voyage? How is he expecting to lure audiences to hear music about sights few have seen? 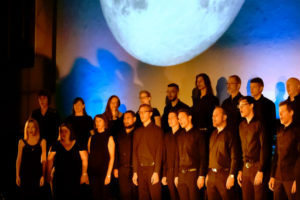 “Well,” said Woodland, “Vox has two mandates. First, we wish to continue the formal, traditional choral legacy of St George’s Singers begun, by Dr Barry Smith, half a century ago.  Then, we intend invigorating local choral music through imaginative programming and, staging, to create fresh intimate sensory experiences. Northern Lights – A Baltic Voyage is third in our Soundscape series – our first was The Tale of the Two Taverners and our second Trust the Silences. On the 1 and 2 September in St Andrew’s Presbyterian Church, Green Point, we are marrying what we call Baltic composers’ music with visual delights that carry the audience on a Northern Lights adventure.”

Kyle Paulssen – a music-seeped third year medical student and Woodland’s first mate on Vox’s voyages – is careful not to divulge too much about their planned avante garde exposition, except to say:  “We are transforming St Andrew’s into a Viking style sailing craft. Our programme represents various Baltic ports of call to see the Northern Lights from different latitudes and longitudes, which our lighting expert is masterminding.”

Woodland continues: “A glass of gluhwein will greet guests when they arrive, and as they settle into their seats our first port of call is England. Yes! Yes! We know the Northern Lights aren’t seen that far south. But England’s CHH Parry’s My Soul, There is a Country with its crashing wavescape is a safe harbour from which to begin our travels.”

Weather conditions in the Baltic regions can be dicey so the Vox singers will seek refuge in Poland (with composer Henryk Gorecki) and Norway (with composer Ola Gjeilo). Sailing on to Latvia two soprano soloists will join Vox (with composer Eriks Esenvalds). In Estonia voices will be quiet as Matthew Golesworthy on organ and Ariella Caira on cello play Arvo Part’s Spiegel im Spiegel. Then supported by organ and percussion, the voices will ring out again with Part’s setting of Psalm 130 and The Deer’s Cry.  Composer Jaakko Mantyjari from Finland, Russian Igor Stravinsky, an old Icelandic chant summoning the aurora, tuned wine glasses, chimes and a tenor solo will be included in Vox’s hour-long  programme in splendid etheralism.

Northern Lights- a Baltic Voyage is a heavenly ballet of light dancing and music floating across the night sky.