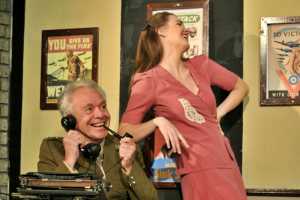 ENSA – the acronym for Entertainment National Service Association – was formed in 1939 by Basil Dean and Leslie Hanson.  Two men with remarkable organisational skills which harnessed talented artists – in all theatrical genres – to entertain forces at the forefront of the World War II fight against Nazi Germany.  As well as on the home front to Keep The Home Fires Burning, Till the Boys Come Home, When the Lights Go On Again.

Having a conductor father enlisted to ENSA’s overseas corps and, myself as a very young dancer part of a concert party performing to wounded troops in hospitals, in and around Glasgow, it was with eager anticipation I drove to Milnerton Playhouse to watch a rehearsal of Richard Loring’s tribute to the courageous beleaguered men and women during WW II and the forces sweetheart, Vera Lynn (Rozelle Wilken). 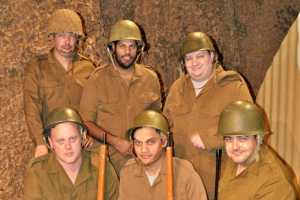 Marching to the same tune

Centre back to Altwig’s wartime set stands a camouflaged Nissen hut sheltering first-rate ENSA musicians Tersia Harley (piano), Basil Heald (bass) and Johann Rossouw (drums). On a table on audience left rests a portable typewriter. Opposite stands a 1930s wireless from which we heard Neville Chamberlain’s 3 September 1939 declaration of Britain’s war against Germany. Later we heard Winston Churchill’s broadcast paying tribute to Hurricane and Spitfire pilots: “ Never in the history of human conflict have so many owed so much to so few”. (Personally, I missed hearing King George VI. In my memory he stands as THE person who held Britain together.)

It takes a director of Altwig’s experience to create a modern day feel to Loring’s historical script. For this balance he chose well, casting Chris Doran as narrator/war correspondent.

Back to Rozelle Wilken.  It could be accepted that for one as young as Wilken is, performing songs from a war three-quarters of a century ago could hold little meaning.  Not a bit. Instead, this charming, sweet-voiced young woman sang with an understanding of what songs Vera Lynn sang meant to the forces. On the other side, glamorous Marlene Dietrich (Petra Baker) may have been from the enemy camp, but the allies regularly tuned in to hear her husky sensuous voice.

Youngsters may consider WW II’s story belongs in dry history books.  Not so. Aided by good sound, lighting effects and original clips We’ll Meet Again is a must for all ages.  So do go along to Milnerton Playhouse for a grand sing-along of much loved songs.

Tickets: Book for show and dinner/show at www.milnertonplayers.co.za/bookings/ or Quicket