John Kani’s internationally acclaimed new play Kunene and the King comes to the Fugard Theatre from 30 April 2019 for a strictly limited season, hot off its world premiere at The Royal Shakespeare Company’s Swan Theatre in England. 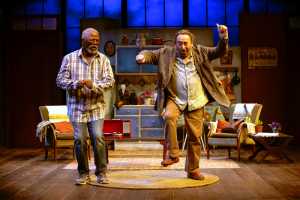 Kunene and the King has received rapturous reviews including five stars from The Guardian’s Michael Billington, who commented, “beautifully captures the complex divides of race, class and politics in a remarkable and moving new play”.

Kunene and the King at the Fugard

Kunene and the King is a moving and funny two-hander that provides a fitting tribute to mark the 25th anniversary of South Africa’s first democratic elections after apartheid. It is South Africa, 2019. Two men from contrasting walks of life are thrust together to reflect on a quarter century of change. John Kani stars as Lunga, a headstrong male nurse contracted to care for cantankerous actor Jack (Antony Sher) as he copes with terminal liver cancer.

Design is by Birrie le Roux (Shakespeare in Love, King Kong, Orpheus in Africa). Lighting is by Mannie Manim (The Tempest, Sizwe Banzi is Dead, The Fugard Theatre productions of The Mother, The Painted Rocks At Revolver Creek, The Blue Iris), music is by Neo Muyanga (the Flower of Shembe, memory of how it feels) and sound design is by David Classen (Langarm, Shakespeare in Love).

Other review comments have included:

“ **** Raw and engrossing two-hander dissects modern South Africa … John Kani and Sir Antony Sher are outstanding … There’s a musicality to the way these actors work together … the writing is rich and raw … Engrossing, and executed with consummate skill” – Sam Marlowe, The Times

What: Kunene and the King at the Fugard