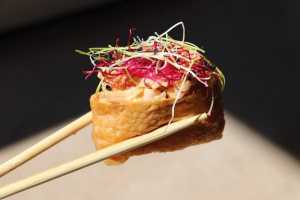 Three things prompted me to order the vegan sushi platter from Plushi. I have been craving sushi for a while, but I am always nervous about vegan sushi from a non-vegan source. The mayo, the boringness of avo and cucumber maki, the disappointment. Then I saw photos of Plushi’s sushi platter on Facebook. And I became a little obsessed. I couldn’t stop thinking about it. I kept going back. Keeping the tab open to stare at the picture of the Zebra Roll, with its black mayo stripe. Trying to find an excuse to order some (it is not cheap). And then I had a deeply personal something to celebrate and I had a friend who needed a bit of celebration spin off, and so I invited her over and surprised her with their platter.

After a small online system scuffle (still don’t know if it was me or it) I managed to place the order and then, yesterday this perfect brown box arrived, accompanied by a menu, chopsticks, a stick of incense, a Spotify playlist (just beyond my current capacity), and strong paper serviettes. The whole thing was stylish, perfect, Japanese and recyclable.  I admit I sneaked a peek before my friend arrived and had to distract myself with deep cleaning so as not to try it out before she came.

I laid the table with our sushi box between us. We sat down and opened the box. It was magical. A feast for the eyes, perfectly symmetrical, beautifully colour co-ordinated and with magnificent attention to detail. Everything centred around a branded glass jar of soy sauce. 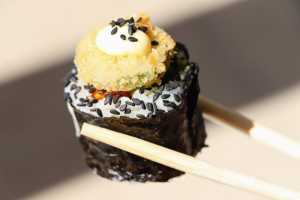 Receiving messages from the universe …

We started at one end with the ‘Tuna’ Crunch, a crispy California roll filled with ‘tuna plashimi’ (I assume tomato) and avo, topped with teriyaki, spring onions and sesame seeds. We dipped, smeared in wasabi, chewed and made grunting noises. We were quiet at first. Then we spoke in poems.

We moved on to the vegan Salmon Rose made with carrot salmon, topped with vegan mayo and vegan caviar. I swore it was my new favourite. Now we were almost rapturous. Then it was the Zebra Roll, a California roll with pan seared teriyaki tofu, brown mushrooms and mung bean sprouts topped with a charcoal truffle mayo. I may have started swearing at this point.

By the time we tried the Caesar Roll, a maki roll with saki soaked shitake mushrooms and romaine lettuce, topped with crispy onions and a cashew-nut based Caesar dressing, we were vibrating and receiving messages from the universe. To put a halo on this all was the teeny dessert, a miso-caramel cheesecake of such divine deliciousness we almost transcended.

Plushi plant based sushi is a whole new level of sushi inspired creativity. Every little thing is perfect. Now I am looking for another thing to celebrate.

What: Plushi – plant based sushi